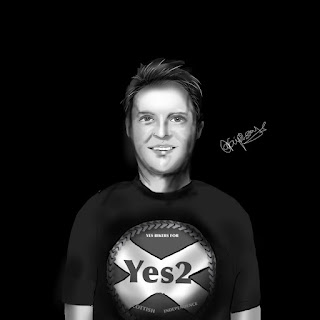 John was born in Glasgow 1967 and grew up in the west end until the age of 6 before moving over to the East  End. In these formative years he developed a love for punk rock which continues to this day and particularly Anarcho Political groups such as Crass and Conflict which he says is where he developed his interest of politics and animal rights.

At 16-17 he was involved with the protests for the miners strike and set up a collection table with 3 others  in Argyle Street Glasgow collecting money for the miners wife's  groups at the time . In total £11,000 was collected and distributed to help feed the miners families.

Along with these activities John was one of the founding members of the Clydeside Hunt Saboteurs operating and effectively campaigned with a large group of fellow activists against the barbarity of the Houstoun fox hunt.

Between the years 1987 -1995 john studied at College and University gaining a BA in Spatial Design and Bsc Architectural Technology then going to live in Southern California travelling Europe, Australia and Uganda in between contracting for Architectural Companies around Scotland.

John met and married Sarah and on the 24th January 2014 his son Joel was born. The next day John  flung  himself head first into the Yes Campaign realising that morning when he picked his son up for the first time that a future in the UK was not a place he wanted to see Joel grow up in. John voted Yes on the 18th of September 2014 and started Yes2 Dunblane on the 19th of September 2014 which is now Yes2 a campaign for Independence group now at 50,000 followers.

John continues to work in Architecture based in Glasgow and lives in Dunblane where he devotes any free time he has to his artwork which can be found on Facebook
Posted by Kitchen Witch at 01:09