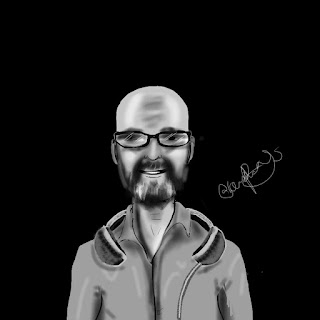 Neil has been politically active all his adult life, and identified with Marxism after stealing a book on Marx from his proddy, anti-USSR, unionist high school in the late seventies. Hailing originally and loudly from County Down, he moved to Scotland as a mature student after ten years of unsuccessfully working, mostly in pubs, building sites, shops, offices and women's shoes, in 1993. [to clarify-I worked in women's shoe manufacturing- I only wore court shoes on special occasions- Neil]

After the sectarian politics of Ireland, he found the working class movement in Scotland to be a real breath of fresh air, arguing and fighting his way through a degree in Film Media, getting sacked for trying to unionise a large hotel and also from a major charity after exposing wrong doing. And anyway, almost as soon as he left Northern Ireland, the troubles ended. It had been his fault.

Neil, while helping bring up a boy genius with his partner, trained to be a teacher while becoming disappointed with New Labour after THAT night of euphoria in May 1997...

In 2002, Neil attended a rally in Arbroath and heard Rosie Kane speak. He joined the SSP once he realised it wasn't just a one person vehicle for Tommy Sheridan. He argued lots about Independence in his branch and then became a branch organiser. As an early adopter of the Internet and social media, Neil videoed SSP events during the 2000's and added them to the net.

Neil's experience of PR (working in theatre in Ireland), helped him steer his branch, as organiser, through the storm that was unleashed by the one man Sheridan show and then went on to steer the SSP's online and social media profile successfully through the Independence Referendum, attracting hundreds of new members during and after that event.

Neil was a founding member of SL Left Unity, and managed to create a media storm that embarrassed the French Front National through headlines generated like "French Front National Pig Bombed!" across the world (and went some way in their trouncing at the ballot box in 2007). SL Left Unity also raised thousands of pounds for women's organisations in Afghanistan, and managed to force the resignation of a CEO of IBM during an "online strike" organised by the group.

Neil was a founding member of "Acting Strange Theatre Company," a controversial troupe who gained notoriety touring in interface areas in the North. The Prods hated us and the Catholics thought we were blasphemous... and a bit dirty. Acting Strange made a debut in Scotland a few years ago when Neil reformed the group and they performed in Faslane (and also performed a podcast black comedy series written by Neil (Tales of the Gareloch) for the Edinburgh Festival 2014).  He has turned his hand to acting on occasions- but the less said about that makes everyone happy.

Neil was one of four official Yes campaign "leaders" in his local authority area; a local Radical Independence Campaign organiser and the SSP Organiser for East Dunbartonshire from 2008- 2014.

Neil has been podcasting on and off since 2010, and presented "Socialist Voices" for the SSP until he resigned from the party EC and then from the party last year. Neil decided that rather than await a socialist messiah or revolutionary core to tell him how to do stuff, he'd create a podcast that is Scottish, but internationalist, with voices from the left unfettered by lefty leaders and their dodgy analysis. And so was born Ungagged!

Neil is a silent member of the SNP- and sees the party only as a means to one end.

Neil is now away to cook some tasty vegan food, drink a cup of green tea, walk the dog and argue over politics with his ultra lefty wife and son and vows never to write in third person again...

You can catch up with more of Neil'S politics, and some fiction here